Hambledon Land has worked closely with arboriculture and ecology consultants and Chiltern Rangers, who manage a number of woodlands on behalf of Wycombe District Council (WDC), to develop a detailed Woodland Management Plan (WMP). The WMP has also evolved through discussions with WDC and the Forestry Commission.

The aim of the WMP is to reverse the decline in the quality of the woodland by thinning and opening up the canopy to allow light into the woodland, and coppicing and pollarding to increase diversity. These measures will increase habitat opportunities and will allow low level plant life to re-establish.

Without a clear management strategy, many of the benefits of this area of Ancient Woodland would be much reduced, or even lost within the foreseeable future.

The WMP forms part of the planning permission and sets down a 15 year programme of works that have now been secured through the Section 106 agreement. The WMP will be funded by the residential development on the site.

In essence, the WMP will deliver the following enhancements:

The proposals will also fund the removal of the former ski slope material and associated infrastructure. The restoration of this area of land, which is designated as Ancient Woodland, will be actioned as soon as construction starts.

It is proposed to provide chalk grassland and scrub mosaic habitat from local seedlings in the area of former ski slope land. The generation of chalk grassland is considered to have considerable habitat benefits and is therefore being suggested rather than concentrated tree planting on the slope. However, selective tree planting is proposed, together with a native scrub and tree thicket at the top of the ski slope, north of the proposed apartment buildings.

There is currently an informal network of footpaths within Deangarden Wood. Very few people use the existing permissive paths in Deangarden Wood and those that do tend to be local and use the woodland for low intensity activities such as dog walking. The access strategy will maintain and enhance the local use of the woodland for similar low intensity activities which suit the Ancient Woodland’s environment.

There is currently an informal network of footpaths within Deangarden Wood (shown on the plan below), some of which are permissive footpaths. There is also an existing Public Right of Way (PRoW) which runs along the boundary of Abbey Barn South and Wycombe Summit to Abbey Barn Lane, where it terminates.

This PRoW is known as 58/1 and some of the gardens at Wycombe Summit (and possibly Abbey Barn South) will back onto the footpath. The Council advised that this presented a security and residential amenity issue and therefore footpath 58/1 should be diverted.

A Public Path Diversion Order has now been granted (indicatively shown in green on the plan below) from north west of the Wycombe Summit site where footpath 60/1 meets with an existing informal footpath and access to Deangarden Wood. The footpath would continue along an existing informal footpath through the woodland and a new stretch of footpath would be created across the former ski slopes, ending with a new connection to Abbey Barn Lane. A copy of the Public Path Diversion Order can be viewed here.

A new footway along Abbey Barn Lane on the Wycombe Summit site frontage would enable a connection to Abbey Barn South and beyond, at some time in the future (shown in white on the plan below). 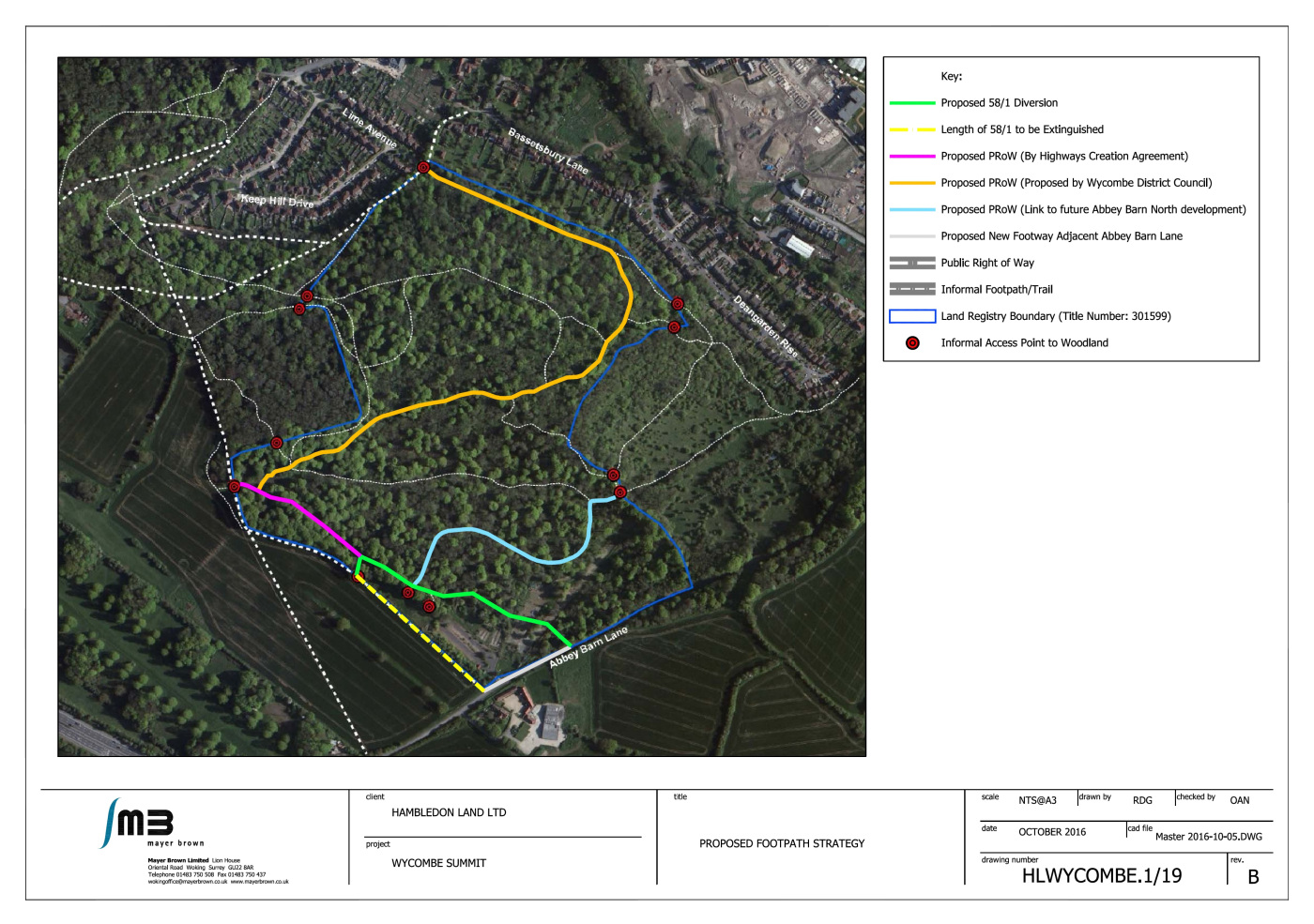